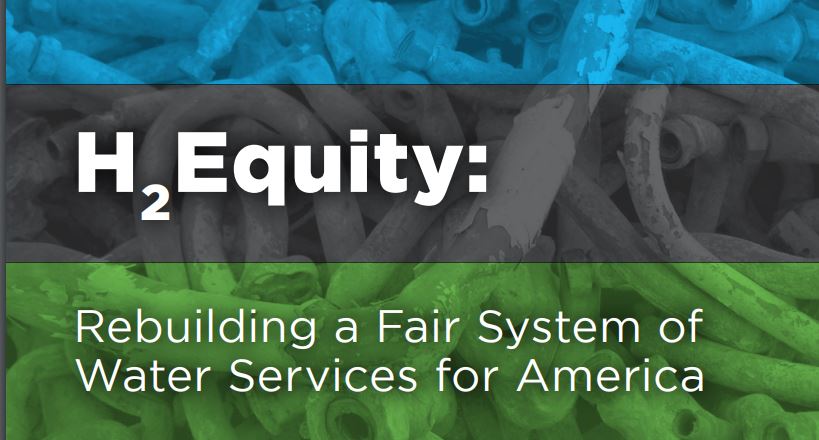 Two weeks ago I started writing a blog post about the intersection of water and equity in the United States. I meant to get back to it last week when, well there’s no other way to put it, George Floyd was murdered less than two crow-flying miles from my house in Minneapolis. Just three days before his public asphyxiation, I bicycled through that intersection at 38th and Chicago on a grocery errand. With the escalation of response over the past seven days, finishing my blog post didn’t exactly rise to the top of my to-do list.

And then, I read an email from Marleah Makpiaq LaBelle, an Alaskan Native and expert on water and sanitation issues facing indigenous Alaskans who allowed me to interview her last year as part of the report I wanted to share through my blog. She wrote:

“This is quite the report and I’m glad it is shining a light on some of the injustices of access to safe and adequate water in our country. I must say, that there could be a report written entirely on water in Indian Country….. I often think about the Native communities that I have worked with and how scary it must be to live in a pandemic without running water.”

And then today, I saw a tweet from water warrior Tyrone Jarvis, a black business owner in Newport News, Virginia, who has pioneered urban rainwater harvest regulations in Virginia at great personal sacrifice. He’s been running his auto repair business solely on rainwater for nearly five years, and yet he’s still running afoul of regulators. Here’s his post:

And I thought about the Alabamians who sent me their appreciation for holding no punches in describing what I saw when I visited Uniontown, Alabama.

George Floyd’s public murder has focused a spotlight on police brutality to Black and Brown Americans, especially men and boys. It’s unconscionable, unfathomable, and yet it happens routinely. But let us not forget that it’s just the tip of the proverbial injustice iceberg. Police are not the only ones that inflict brutality on communities.

Though we didn’t use the language of brutality and abuse in our report issued earlier this winter, maybe we should have. Inequities in funding, in water quality enforcement, in whose water gets polluted, who pays, and who has a voice, are other facets on the polyhedron of systemic and structural injustice that our country is built on.

We often say that water infrastructure is taken for granted, out-of-sight and out-of-mind. That’s true when it works for you. My (primarily white) neighbors and I turn on our taps, flush our toilets, and have what, for us, is a modest monthly fee automatically withdrawn from our bank accounts. We have not a care in the world when it comes to water, and rarely think about it. (Well, I do, but you know what I mean.)

But that’s not the case for millions of Americans. I won’t say more, other than, read the blog I started to write (below), and read the report as well as the individual case studies. And go easy on me. This isn’t the season for worrying about a perfect blog, but it is time that we all get a little uncomfortable with our comfort. We all start our journey somewhere, and reading our report, or at least the case studies, is as good a place to start as any.

Most of my work, including serving as a volunteer officer for the Water Environment Federation, tends to focus on what is working with water. Every day, hundreds of millions of Americans fill their glasses, step into the shower, make dinner – all without worrying about getting sick. Similarly, they (we) flush toilets and trust that somehow that fetid water will disappear beneath our feet to be transformed into clean water before it is returned to our lakes, rivers, and oceans. It’s kind of miraculous, when you stop to think about it. Right?

As wonderful as that is, I can’t let that daily good-news routine blind me from the unfortunate reality that not everyone shares in the bounty of what the United Nations has declared to be a basic human right: access to clean water and sanitation, all at an affordable cost.  Not at all.

Last year, I was part of a team tasked by the Robert Wood Johnson Foundation (RWJF) to explore the connections between public water infrastructure, well-being, and health equity. By way of background, thanks to the gifts of the late Mr. Johnson (of Johnson & Johnson), RWJF has been supporting public health in the U.S. for more than fifty years, currently giving out USD$500,000,000 per year. With that muscle they’ve been able to help turn the tide on big tobacco, childhood obesity, and other mammoth public health challenges. As part of their interest in healthy communities, their exploration of the role of public infrastructure gets at the basic tenants of public dollars: are we spending them in a way that spreads the benefits equitably?

To answer this question, we (my colleagues Tim Male and Sri Vedachalam of the Environmental Policy Innovation Center and I) dove into reports, drilled into utility websites, and spoke with more than 100 people to get a sense of the challenges and what could be done about them. Naturally, we then wrote a report about our findings, which I’d love for you to read: “H2Equity: Rebuilding a Fair System of Water Services four America”.

Spoiler alert: when it comes to water (and pretty much everything else) the answer is “no”.  The bottom line is that in the U.S., public dollars for water are disproportionately spent on large cities, and within those large cities the expenditures are most likely to skimp on investments in already disadvantaged communities. It’s a version of “the rich get richer” story.  But naturally, there are solutions. Which is why you should read the report, or at least the brief.

← A Waterfront View in the Time of Coronavirus
Helping Mom: Frustrations of a high water bill →