Trials of an Urban Stream

Earlier this fall I took my dogs into Jacobus Park, the county park that’s a few blocks from my home in Wauwatosa, Wisconsin, hoping to let them get their feet wet as a consolation prize for not being able to take them swimming in any big water. We walked down to the creek, which isn’t more than three feet wide on most days, and I couldn’t help but notice the yucky crud oozing from a 12-inch (?) pipe. I’m not an expert on yucky crud, but it had a rusty iron look, mixed with the sheen of petroleum products, somehow giving it the a consistency of whipped cream that sat in the sun too long.  Hmmm. Had it been there on previous visits and I never noticed it before? Certainly the pipe has been there for decades, but what about the gunk?

After spotting the oozing pipe, I couldn’t help but notice five more pipes opening into a  stretch of stream probably no more than 40 yards long. (If you look carefully, you’ll see two pipes in the photo on the right.) 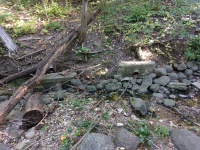 Where do these pipes come from? What was their original purpose? The banner image, which I created by clipping USGS imagery and drawing the stream’s approximate route, shows that the stream has a wooded buffer to the east and west, but sits within an urban community built primarily during the early part of the last century (~1910-1930).

In fact, the stream itself emerges from a pipe, the original stream bed and wetlands that probably fed it having been long since buried beneath the houses south of Wells Street. 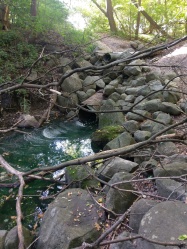 As if all of these pipes didn’t raise enough questions, the color of the stream, reminiscent of the water feature at a miniature golf course, certainly caught my eye.  I assumed that the city had been conducting dye testing, but Wendy Troy of the city’s engineering staff  told me that they hadn’t been doing any testing in the area.  She thought that it was probably blue-green algae, a category of generally toxic bacteria (no, they aren’t actually algae) that thrives in water polluted by too much fertilizer running off from nearby lawns.  In some cases the toxins have been known to kill dogs and other animals that swim or drink the water.  So maybe I need to re-think where I take my dogs to play? At least until my neighbors re-think their lawn care.

There was a time when this little patch of woods, just a few yards downstream from where these photos were taken, was dotted with springs that were tapped by a water bottling company. This was in the day before municipal water supply, when most drinking water was delivered in bottles by private water suppliers. Are these remnant pipes somehow tied to that history? Did they serve as drains to help make the surrounding land more developable? Are they seepage pipes from filled wetlands?

I may never get answers to my questions, but one thing is for sure: this poor little stream, like most urban streams, certainly has taken a beating.

← The Morning After
Democracy in Action: The importance of water →