Grey(water) is the New Green 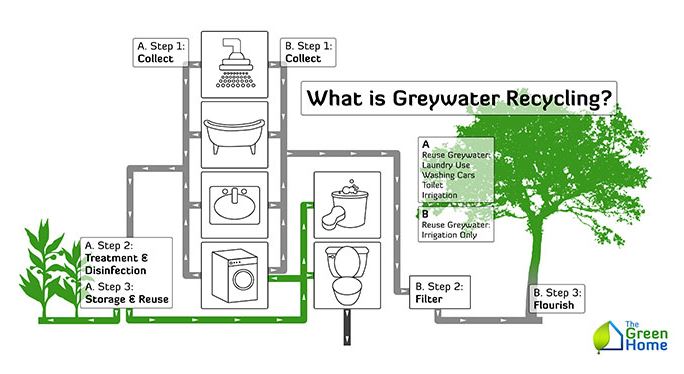 When people hear the term “onsite wastewater” most, including those who work in the field, immediately picture septic systems.  While it’s true that most of the industry has traditionally been focused on rural and suburban septic system for homes and businesses, with today’s need to reduce water and energy footprints, all while finding ways to stretch our dollars further, “onsite” is taking on new meaning.

One of those is a growing interest in finding ways to use “greywater” onsite rather than just sending it straight to centralized treatment.  Those living under extreme water restrictions and/or escalating prices for water (think Texas and California) are generally the first to think about ways to re-purpose their gently used water.  During the National Onsite Mega-Conference in early November one speaker, James Weishuhn of Weishuhn Engineering, estimated that approximately 50% of household water use is greywater. That’s the water from showers, laundry, and bathroom sinks, and is in contrast to the “blackwater” from toilets and kitchen sinks. (Aside: I was surprised that kitchen sink water was included in the “black” category, but I presume that’s because so many people use food grinders.)

Greywater systems come in all shapes and sizes. At the Medieval end of the spectrum are people like me who, when the rain barrel runs low, start capturing shower and laundry water in buckets to haul outside for watering plants. For those who want to eliminate the bucket-carrying but are willing to put in some work there are a number of do-it-yourself examples and plans available on the web, such as this one. But before you get too far into it, you might want to check your state’s health codes to see whether you live in a state that has modified its policies to allow for greywater capture and reuse.  There are a few websites that have consolidated links to the various state and national codes, along with rich information about design and installation These include Oasis Design, the Water Wise Group (see left column), and Greywater Action, though I’m sure there are others.

The good news, however, is that interest has grown to the point where there are now off-the-shelf greywater systems for homeowners looking for help.  The aforementioned Weishuhn Engineering has created a low-cost (less than $1,000), easy-to-install “Grey-Green System” that redirects greywater for landscape irrigation. For those with more money to invest, there’s the slick Nexus eWater which collects and filters greywater for both irrigation and toilet use while also harvesting the heat embedded in the greywater (all those hot showers!) to offset some of the energy needed for water heating. The system has recently been adopted by KB Homes, one of the largest U.S. home-builders, which is incorporating it into its “Double ZeroHouse” in suburban Los Angeles. For KB, there’s a double-bonus. Not only are they building for sustainability, but by reducing water use they are permitted to build more houses for a given site, which translates to better financial returns for them.

Greywater reuse makes a lot of sense in areas with limited water availability, but there are other reasons for taking a hard look at it.  Even in regions with seemingly abundant freshwater supply, treating and distributing potable water, and then collecting it for treatment after its use, requires large amounts of energy and energy-intensive chemicals.  Anytime water use is reduced, energy use is reduced, and that’s a good thing for all of us.

But equally important, greywater reuse can help us solve America’s dirty little secret: the challenge of failing septic systems.  Disproportionately creating burdens for low-income communities, many rural homes depend on septic systems that are either poorly designed, poorly sited, poorly maintained, or all of the above. Watch for an upcoming piece when I delve into this topic more thoroughly but, in short, diverting greywater for other beneficial uses has the ancillary benefit of reducing the load on the septic system, reserving its functionality for the more contaminated water coming out of toilets.

Keep your eye on new innovations for greywater, and hopefully modernized state policies that allow for reasonable application of these systems.  And if you’re in the market for a greywater system, don’t give up.  It’s still unconventional, but there are many others on the journey ahead of you, clearing the path for those who follow.

← Onsite Water: The Future is Now
What to NOT Give for Christmas →