Water Worries: A Journey into Nitrates

Up until recently, when I thought of nutrient pollution I tended to think in terms of eutrophication, the over-fertilized condition that boosts the growth of algae and bacteria, which can then lead to low oxygen levels and fish die-offs when those algae die and decompose.  It’s plain old yucky and can really take away your appetite for wanting to take a dip on a lazy summer day.

But lately I’ve been starting to shift my attention to the human health implications of nutrient pollution.  Last August  (2014) Toledo, Ohio had to shut down its water supply because the cyanobacteria, fueled by phosphorus pollution, had grown to such levels that they were creating unacceptable levels of toxins in the water supply.  I wrote about this a few weeks later when I was paddling on a rural stretch of the Wisconsin River and saw evidence of the very same problem.  I was hot and thirsty, but the bright green algae were making me think a little queasy about taking a dip.

Just last month (January 2015) the Des Moines Water Works took the bold step of issuing a Notice of Intent to Sue the upstream drainage commissioners for excess nitrates in the river from which they draw their water. The Water Works contends that it has had to spend millions of dollars to develop nitrate removal capacity, and then another $7,000/day in operations when the nitrate levels are especially high.  Their biggest beef seems to be the nitrate problem (and hence the cost) has been growing in recent years, despite voluntary efforts by some farmers upstream to curb the pollution.  (By the way, the NOI is fascinating reading even for non-lawyers. Go ahead, find out for yourself!)

Thinking about Des Moines, I started wondering what else we know about nitrate in our water supply, especially as it relates to human health.  And so I spent a morning poking around to see what I could find. Here are a few highlights.

Where do excessive nitrates occur? To relatively quickly answer this question, I turned to the US Geological Survey, a trusted source on water quality data (to the extent that they have funding to study it, that is). Two images, both found on their “Nitrogen and Water” page, show nitrate concentration in surface water bodies, extrapolated from sampling points, and modeled estimates of nitrate concentrations in shallow groundwater (orange and red areas have especially high concentrations). I should note that the studies from which these images were taken are both more than ten years old, but the general pattern probably still applies. 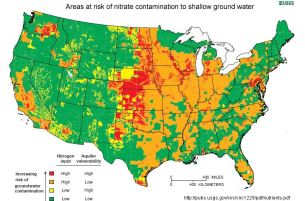 The main take away from these maps is that pollutant loadings are highest in areas with heavy crop production, specifically the entire grain belt, the Central Valley of California, eastern Washington, and the highly productive Delmarva Peninsula and Chesapeake bay watersheds.  (Anyone want to guess that the part of Idaho that looks contaminated is where our potatoes are grown?) There could easily be quite a bit of variation depending on local conditions, but given that most rural residents get their water from wells, it behooves one to be proactive and get one’s water tested.

Where do nitrates come from? Many of the sources I looked at pointed to agriculture as the largest source, but this image from a 2012 report “Addressing Nitrate in California’s Drinking Water” by the Center for Watershed Sciences at UC-Davis, documented it very specifically for California’s Central Valley. (The dark blue is “cropland”, the purple is “WWTP” for Wastewater Treatment Plants, the yellow is “Septic”, and the green is “Urban”.)

Why are nitrates bad?  I found a presentation created by Bruce Macler of EPA’s Region 9 (which includes California) on the health effects of nitrates.  He describes the well-known “blue-baby syndrome” or methemoglobinemia which can impact infants who drink (or have formula made from) water high in nitrates.  The nitrate molecules are converted by gut bacteria into nitrite molecules which then enter the blood, react with hemoglobin to make methemoglobin, which cannot carry oxygen. In the extreme case, death ensues. According to Dr. Macler’s presentation, methemeglobinemia is only a problem where nitrates are especially high and there is bacterial contamination.

But whether or not nitrates in the water can cause other health problems seems to be still a matter of debate.  As for causing cancer, Macler draws short of saying “no”, but says that the studies he’s reviewed are either equivocal or conflicting.  He also highlights other potential health concerns (e.g. hypothyroidism), but again implies that there is not enough evidence to create concern.  On the other hand, the Pacific Institute seemed a bit more confident about the potential health ramifications from nitrate exposure. In their 2011 study “Study on Nitrate Contamination in the San Joaquin Valley” they sum it up in the following excerpt:

Their 2012 book A 21st Century Water Policy more or less repeat the same claims but with updated documentation and a few more diseases added to the list. I don’t know where the final answer will lie, but there’s enough question marks dotting my notes to make me uneasy.

Who’s paying the price? In some ways, we all do.  As has already been pointed out, the people who are serviced by Des Moines Water Works are paying for the nitrate removal in their water system.  Someone upstream pollutes, everyone  downstream pays. Small rural operators servicing low-income communities may not be able to afford to make the upgrades that Des Moines has put in place.  In those cases, as was poignantly documented in the 2011 Pacific Institute study, residents, many of whom are living off of barely $1,250 per month, are paying double for their water. They are paying a monthly water bill of about $25, but on top of that they must travel to distant stores to purchase bottled or “vended” water.  Some install their own filters, but most cannot afford that expense and even those that do are not able to service the filters, meaning that they have only a placebo for a filter. Whereas the federal affordability guidelines dictate a maximum cap of 1.5% of income for water, these communities are paying an average of 3.9% of their entire paycheck on water, to say nothing of the disproportionate effort they endure.  Similar findings were documented in the UC-Davis study referenced above. For comparison, my husband and I pay about $14 per month for our water, which is about the amount that the EPA says those very low-income households in the Pacific Institute’s study could afford.

What can we do? The one thing that seems clear is that we have to do something, or more likely we need to do a number of things.  In addition to the short-term fixes like making sure that people have access to clean water, among other things the UC-Davis study recommended a fertilizer excise fee that could be used to offset the costs of load reductions, nitrate monitoring, and safe drinking water actions. I’m sure that wouldn’t go down easily in some circles, but in terms of re-balancing the cost equation for pollution it seems like something that we can’t afford to not take a hard look at it.

As usual, I’m left with more questions than answers.  Just how bad of a health risk do nitrates actually present? Does anyone outside of California even pay attention to nitrates? What about people on private wells in agricultural regions – do we know whether they are at risk? Are there correlate water contaminants, perhaps agricultural chemicals or pharmaceuticals, and bacterial or viral contaminants that tend to co-occur? How have other countries with heavy agricultural economies (e.g. Denmark, Netherlands, Germany) dealt with this problem?  If you know the answer, don’t keep it a secret. At least one inquiring mind (mine) wants to know!