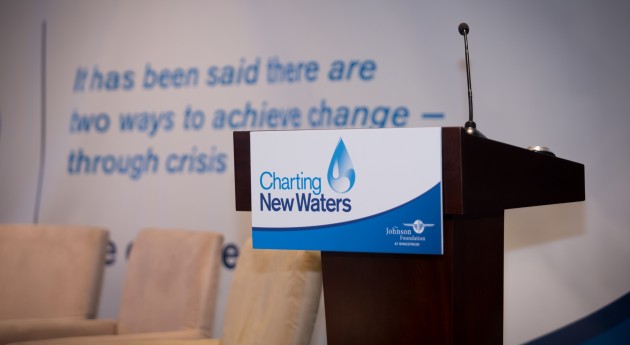 With the shoreline in sight and the wind at our backs, the last few weeks have gone by quickly.  It’s been more than six years since The Johnson Foundation at Wingspread decided to try out a new approach to its convenings.  With that in mind, they brought me onto the team in late 2008 to bring into shape a still-forming concept about how to strategically use their resources to have deep impact on an issue the Foundation cared about: our country’s freshwater resources.

On September 29 at WEFTEC, we released our final report, “Navigating to New Shores: Seizing the Future for Sustainable and Resilient U.S. Freshwater Resources,” with all of the hoopla and energy that comes with a 20,000-person conference.  The press coverage has been terrific, ranging from an interview with Monica Trauzi on E&E TV, online coverage from USA Today, BNA and a host of other blogs and print outlets.

At junctures like this one can’t help but reflect on what has changed since we began the work. In those early years of 2009 and 2010, we routinely heard that people take their water and water services for granted and that the water sector was slow to embrace change.   In trying to come to consensus on our 2010 recommendations in “Charting New Waters: A Call to Action to Address U.S. Freshwater Challenges,” some of the most difficult discussions were over climate change.  Some worried that their membership could not agree to its inclusion, while others refused to sign onto the document if it didn’t acknowledge this as the defining issue of our day.

Those conversations seem like a distant memory.  Today the wastewater sector in particular, led in part by big thinkers at the Water Environment Federation, is leading a charge for innovation and sustainability perhaps best summed up in its Energy Roadmap and soon-to-be-released Nutrient Roadmap.  Leaders in the sewage sector know that they will play a key role in urban sustainability, with better nutrient capture and recycling, and energy harvest, eventually being able to apply these technologies to farm and food processing operations as well.  While the public still undervalues its water, that’s starting to change, driven in part by unfortunate events like water shutoffs and chronic droughts.  And the majority of Americans now believe that our climate is changing, and we need to do something about it. 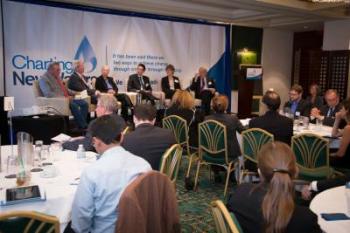 We’ve also seen a tremendous evolution in the acceptance of green infrastructure as an essential component of sustainable water management.  In 2009 rain gardens, permeable pavement and green roofs were still in the realm of boutique projects driven by NGOs and their supporters. Today we are seeing distributed green infrastructure and ecological restoration routinely integrated into municipal stormwater and CSO plans.  Multiple federal agencies, including DOE, DOT, USDA, HUD, etc., are seeing that they play a role in stormwater management as well. That said, we still have a very long way to go before natural landscapes become a routine tool for urban water and climate management.

Over these six years we’ve also seen the concept of decentralized utilities come out of the closeted conversations that it was relegated to, to a point where at least some major utilities are actively exploring how to incorporate these new concepts into all aspects of their services.   For those of us that look at the glass as half full, these developments are very encouraging. The momentum is in the right direction.

But what are the big needs ahead? During our panel discussion in Washington, D.C., on October 8, Kate Wolford, president of the McKnight Foundation and a Johnson Foundation board member, stated that she felt our report made a big contribution in its highlighting of the water-energy-agriculture nexus and especially some of the points where we can move innovation forward. Our report was released during the week when Environmental Grantmakers Association hosted its annual meeting, and Kate said that the halls were abuzz about the report, including this concept.

In thinking about the big opportunities ahead, I think that Kate is right.  We need energy, we need food, we need water, but providing each of these has major implications for the other.  Traditionally, in our typical silos, providers feel pressure to provide cleaner water, more water, more food, and more energy, but we do so in a way that increases the stress on adjacent resources.  If we turn to biofuels to provide more energy, that uses water and steals productive land from the food supply.  If we intensify our food production using the same techniques we’ve turned to for the last 40 years, we will pull more water up from deep aquifers, send more pollutants to our waterways, and demand more energy for fertilizer production. In the realities of a resource-constrained world, we can’t keep robbing Peter to pay Paul.  We must find ways to provide these services while not further degrading our planet’s resources.

Fortunately, there is a way.  There has to be a way.  And those are the new shores to which we need to navigate.

But it’s not just our way of providing food, water and energy that is navigating to new shores.  I am also heading out on a new adventure.  After nearly six years of some of the most privileged work imaginable, I will be launching my own vessel.  My last day with The Johnson Foundation is October 31, but it will also be my first day with Broadview Collaborative, Inc.  I’ve set up Broadview Collaborative as a platform to be able to continue to work on these critical cross-sectorial, interdisciplinary sustainability and resiliency challenges that are absolutely essential to solve if we are to continue to enjoy life on this blue planet we call home.  I hope that you’ll find me there, as well as through the tried-and-true methods like LinkedIn and Twitter (where I’m still @LynnBroaddus).   There’s work to be done!

2 Comments on “Navigating to New Shores”